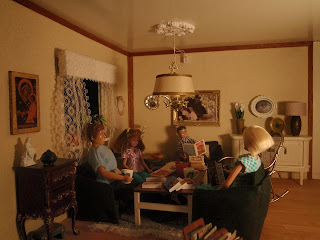 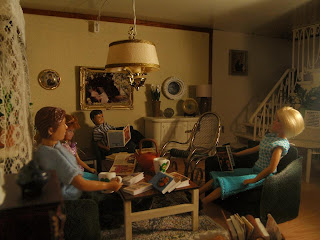 ENG: Even though I was the one having a birthday, it was the Lund family who received a load of new books to read in the mail. Helmer is trying to recover his school French, he has even bought himself a dictionary, and can now put it to use when reading "La guerre des boutons". But reading french was a bit exhausting, so he had to have a coffee break and wondered if he shouldn't rather relax with the butterfly book. Tomy is reading his new "Noah's ark" and Annika enjoys her "Alice in Wonderland" filled with wonderful pictures as it is. She also looks forward to start reading "The little house on the prairie" books, of which she now has got the whole series.

Nora had also bought some books, but wanted to finish her " A dolls house" first. Not only did the author, Henrik Ibsen, come from Skien, the same town where they live (and I), but more peculiar was the coincidence that the main characters in the play are a couple named Nora and Torvald Helmer. Nora found this so weird, she couldn't stop reading. 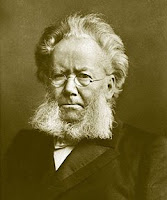 UPDATE the 24th of April:

Apparently the Lund family are more aware of current events than I am. Yesterday, I just was told , was infact the International Day of the Book!

Credits: Miniature books by Grace at TreeFeathers and Jean Day. Thank you both!
The dolls house book is an ebay find.
A dolls house is a play by Henrik Ibsen, 1828 – 1906, born in Skien.

The complete works (mostly plays) of Ibsen are

Did you really name your dolls after the characters' in Ibsen's? I must borrow a copy to read as well. This is a cosy setting.

Thanks again Sans!:) Yes, but not only from "a Doll's house" The name of the man running the Second-hand shop "Gjengangere" is Osvald Halving (Halfling)named after the main character Osvald Alving in the play "Gjengangere" (Spooks, or the Revenants) As you may have noticed I love puns:)

I must admit I never have read any of Ibsens plays, but I've seen a few of them. All the plays listed are linked to Wikipedia pages where you can get brief summaries. 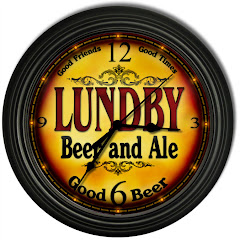 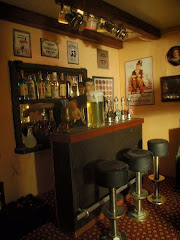